Dominics Fine Jewelry: Did Drew Barrymore Get Engaged over the Holiday?

Posted On January 5, 2012 at 10:23 pm by Dominic Maratta / Comments Off on Dominics Fine Jewelry: Did Drew Barrymore Get Engaged over the Holiday?

While the end of 2011 brought delight, joy and dazzling diamonds to life for many celebrities, including Britney Spears, Steven Tyler and Anne Hathoway; Other celebrity couples took a turn in the opposite direction.

Katy Perry and Russell Brand’s sudden divorce filing simultaneously surprised the entertainment industry, and cemented many predictions made on the sustainability of a marriage between the two.

Perhaps they caught the same bug Nick Lache and Jessica Simpson did, back in the MTV’s reality series ‘Newlyweds: Nick and Jessica’ days. They too, following three years of marriage, split from one another in the Winter months of 2005.

It appears that celebrity engagements and separations both have a heightened amount of activity surrounding the beginning of a new year.

Thankfully, we can share in the happiness of the many stars that are rejoicing over their recent engagements! Britney Spears recently told People, “I can’t stop looking at it!”, referring of course, to her recently acquired unique crown embellished Princess Cut Diamond Engagement Ring. 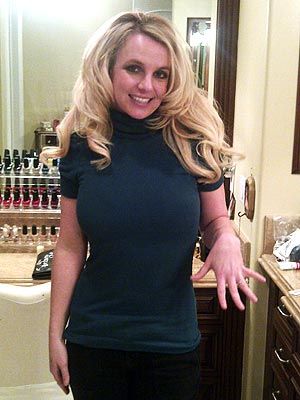 On December 16, 2011 in Las Vegas, then boyfriend Jason Trawick proposed to the pop princess with the signature Princess of Princess Cut Diamond Rings by Neil Lane. Britney is still admittedly beaming with excitement over the engagement… and the ring!

Kristin Cavallari received an exquisite square cut stone in the engagement ring she accepted from on-again, off-again, definitely on again now fiance, Chicago Bears quarterback Jay Cutler during the Winter months of 2011. The engagement ring is estimated to be about 5.2 carats in total diamonds.

Cavallari and Cutler met in August 2010 after E! News host Giuliana Rancic set them up.

Don’t forget about the stunning Anne Hathaway, who accepted a proposal during Winter of 2011 from long time sweetheart, Adam Shulman. Her incredible emerald-cut diamond engagement ring was a co-designing effort between experienced designer, Shulman with a lot of help from Kwiat to complete the perfect engagement ring.

“How can you not notice that ring?” Matt Lauer asked Hudson when she flashed her emerald-cut dazzler – a gift from fiancé and Muse singer Matthew Bellamy – during an appearance onToday.

While it may have been a few months before Winter chills were in the air, the engagement ring given to Kate Hudson by Muse frontman Matthew Bellamy, was among the most impressive and exquisite diamond rings seen all year. Therefore, her emerald cut stone, along with Matt Lauer’s reaction, is more than deserving of a Dominic’s Fine Jewelry mention. 😉

About That Drew Barrymore Engagement…

People Magazine has done an impressive job with their Drew Barrymore Engagement News Investigating, today alone! The news was first leaked in the later hours of the morning. At just 4p.m., we’ve now been provided with significant details surrounding the engagement between Art Consultant Will Kopelman, and the deliciously adorable Drew Barrymore.

A trusted source informed People Magazine that the two were engaged in Sun Valley, Idaho, where the couple spent about ten days during the 2011 Winter Holidays. The following are a few select quotes…

“Kopelman proposed with a colorless radiant-cut diamond ring by Graff.”

“They are very happy together,” adds the source.

Don’t worry;  We’ll keep you updated on the Drew Barrymore diamond ring details as soon as they begin to surface.  Thanks for spending some time reminiscing with us today!

Here’s hoping that your 2012 is full of hope, health and great happiness!